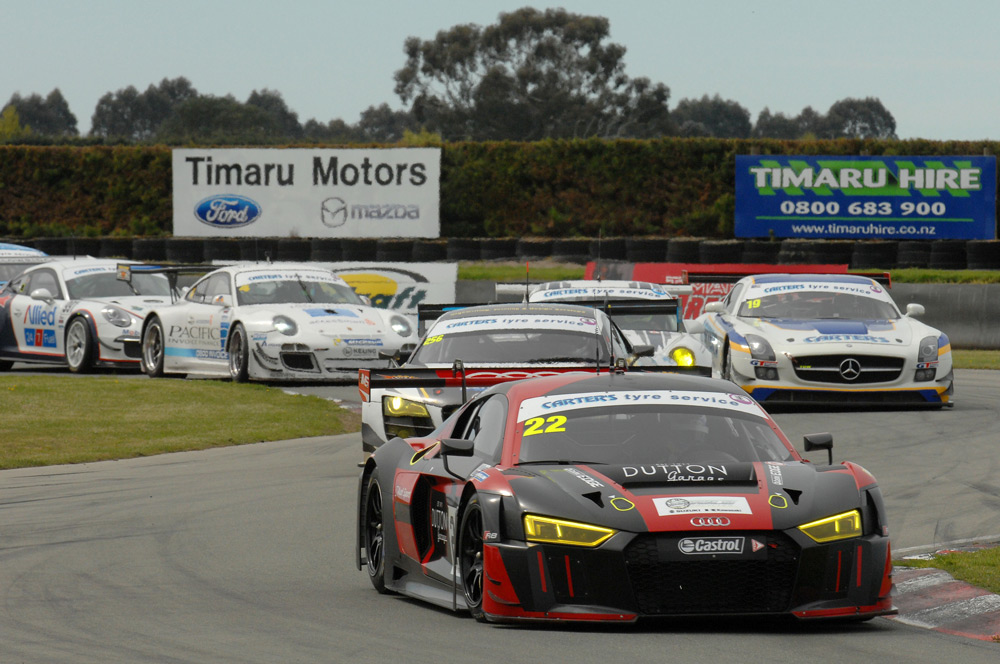 On the same weekend that his former Dick Johnson Racing team will be hoping to win the V8 Supercars title with Scott McLaughlin, Kiwi driver Jonny Reid will be chasing championship glory of his own at Highlands.

Reid and co-driver Neil Foster will be one of the fancied pairings to win the 2018/19 Carters Tyre Service New Zealand Endurance Championship (NZEC) on Saturday, November 24. The top 20 cars from the North and South Island Endurance Series have been invited to compete in the ‘winner takes all’ finale at Highlands in Central Otago. Foster won the South Island title with three wins from three, two of those with Reid.

“Motorsport is pretty much a hobby of mine these days and I’m pretty lucky to still be racing,” says Reid. “It’s been great to watch Neil’s progress over the last few years with the support of a great team at International Motorsport. Endurance racing has gone from strength to strength in recent years and it’s one of the best things that’s happened to New Zealand motorsport.”

Reid comes from a racing family steeped in the sport and he looked destined for great things when he finished second in the 2007 and 2008 A1 Grand Prix championships. A brief flirtation with the Indy Lights series in the US in 2008 ended in disappointment as did a stint with Dick Johnson Racing in V8 Supercars in 2013.

“I wouldn’t call my time in V8 Supercars a career especially compared to what I achieved with the New Zealand A1 GP team,” says Reid. “It was good to have a crack at Supercars but I knew what I was getting into. The team was in dire financial straits when I drove for them and it goes to show you how much of motor racing is about timing. I was hopeful of getting good results in the car but funding was always an issue.”

The year after Reid left the team, American motorsport legend Roger Penske bought a 49 percent share in the team that was renamed DJR Team Penske.

“To see the team bounce back with the support of Penske has been fantastic, particularly with two Kiwi drivers in McLaughlin and Fabian Coulthard,” says Reid. “To see them winning races and be in contention for the championship the last few seasons has been great to watch.”

Reid and Foster can expect stiff competition for the NZ Endurance title from the reigning champion, Simon Evans in the NZ Supertourer Holden Commodore and John McIntyre and Simon Gilbertson who won the ENEOS North Island Endurance Series title earlier this year. McIntyre and Gilbertson will be racing a Chevrolet Camaro GT3 that won the NZ Endurance title in 2016. Reid and Foster meanwhile will be chasing their first title in an Audi R8 Le Mans Series.

“In 2012 I drove in the Bathurst 12-hour and won the Class B category in a 2009 Porsche Carrera Cup car,” says Reid. “I really enjoyed the experience but I remember the A class GT cars passing me and it became a dream of mine to race in some of these higher end cars. Since then I’ve been lucky enough to race in a Ferrari 458, Audi R8 Ultra and now the Audi R8 LMS. All of them have different characteristics but the LMS GT3 is a very special car to drive. It’s so refined and so polished and the straight line speed is incredible. It’s a surreal experience.”

“We’ll be heading down south looking for a win but it will be a real tight race at Highlands. It’s probably one of the rawest racing circuits in the country but I expect nothing less from Tony Quinn because he’s got a real racing instinct himself.”