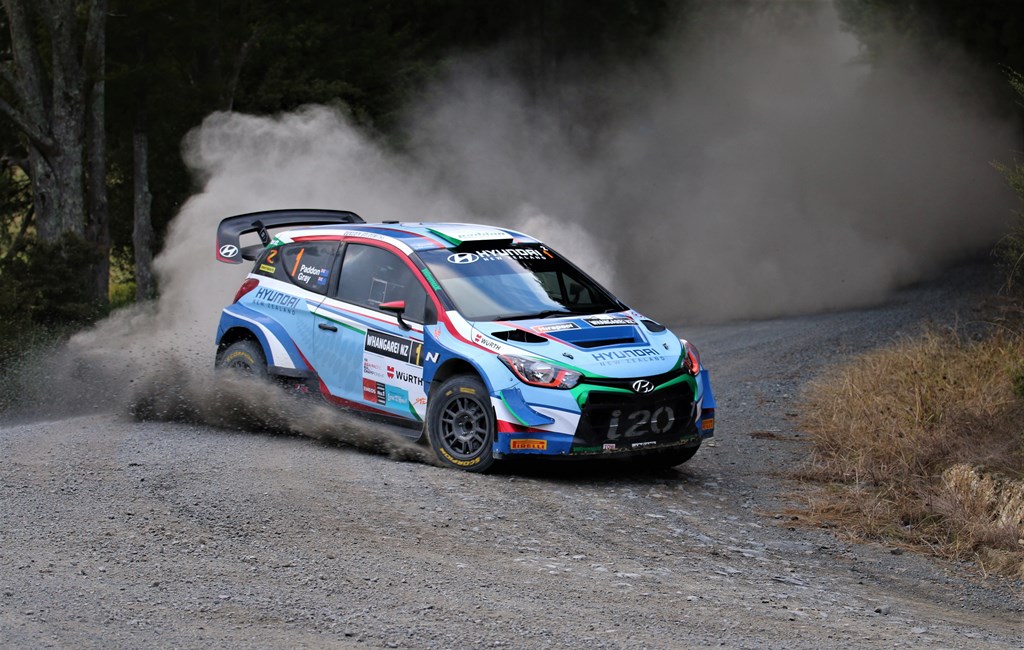 Hayden Paddon has ticked off his key goals at the 3-5 May running of the International Rally of Whangarei – the outright rally win, maximum points towards the Pacific Cup component of the FIA Asia Pacific Rally Championship, and new stage records on more than 80% of the rally’s special stages.

With new co-driver Samantha Gray calling the pace notes on a rally Paddon has now won five times – and despite a few technical issues with the Hyundai i20 AP4 that kept the Paddon Rallysport crew on their toes – the pair won the rally by over four minutes from second-placed Ben Hunt and Tony Rawstorn, the New Zealand Rally Championship field winners.

“It was a good weekend and we achieved everything we wanted to,” said Paddon who finished four minutes, 40.8 seconds ahead of his closest APRC competitor David Holder. “A few small technical things gave the team – with John Kennard as our team manager this weekend – some things to work on and held us back a little, but like always, they did an amazing job keeping the car going in stage record-setting form. So not a perfect weekend but we achieved the desired result; we got the stage records we wanted, so in that respect we hit our objectives.”

Paddon was very pleased with the performance of his co-driver, Samantha Gray, on their first event together. “She did a really good job. Samantha was thrown in the deep end, especially with the thick fog on the first stage on Saturday – that was really tricky for a co-driver, but she learned quickly and took everything onboard. She adapted and it was impressive to see how she improved as the weekend went on.”

The International Rally of Whangarei is renown as a well-run event and this year was no exception with big crowds out viewing the action. “I loved it! The team did an amazing job and as always, it’s over too quickly! The roads were in really good shape. It’s been dry so the roads were hard; quite loose in the first pass with gravel, but in the second pass, offering a lot of grip. It’s always challenging because as the roads get more grip you want to be going faster and carrying more speed, so there was quite a high attrition rate this year with only 21 finishers in the 51-strong International Rally of Whangarei field.”

Paddon is delighted to extend his lead in the FIA Pacific Cup. “This is one of our priorities this year, so it’s good to progress that. Now we must see how the Australian APRC rounds pan out. We are considering going to the second Australian round towards the end of August and are looking at all the options and opportunities in terms of a Hyundai to use there. However, currently we’re in the best possible position, having scored two wins and maximum Pacific Cup points from the two New Zealand rounds.”

Next up on Paddon’s competition calendar is the South Canterbury Rally on 22 June before he flies out to France Europe for his first Global Rallycross Europe event on 29 June.