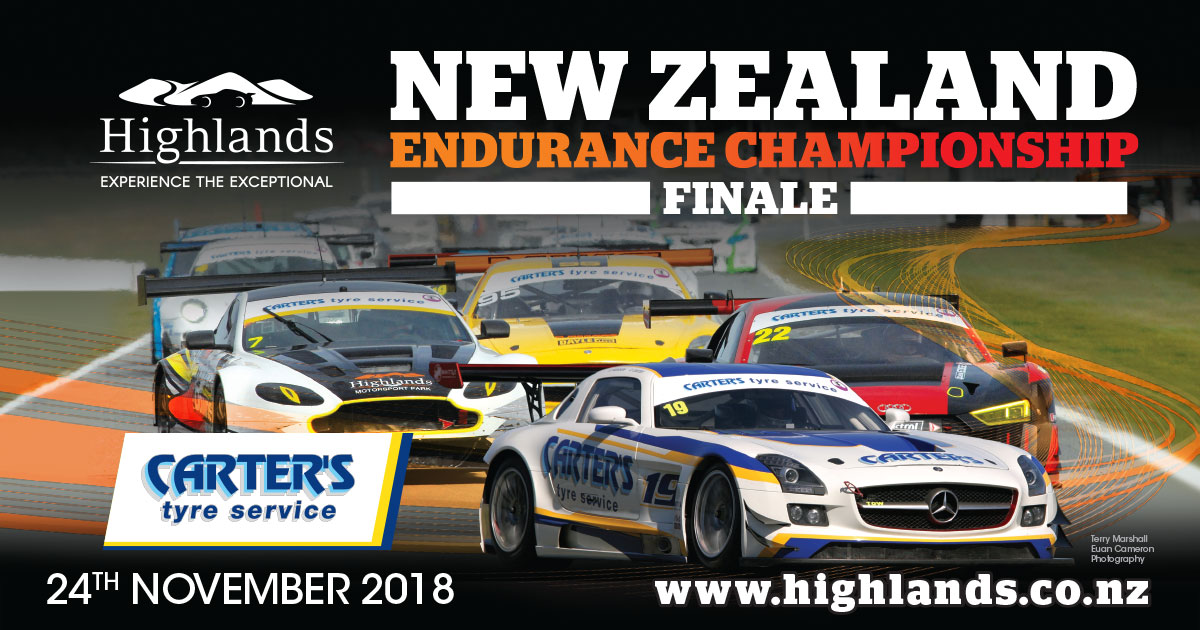 NZ Endurance title to be decided at Highlands

Bragging rights and national titles are at stake when Highlands hosts some of the fastest cars in the country at the 2018/19 Carters Tyre Service New Zealand Endurance Championship (NZEC) on Saturday, November 24.

The top 20 cars from the North and South Island Endurance Series’ have been invited to compete in the ‘winner takes all’ finale.

“There’s a massive rivalry between the two series and bragging rights are very important,” says Chris Dunn, the Series Coordinator for the South Island Endurance Race Drivers Club (SIERDC). “As well as deciding a national champion for the 1-hour and 3-hour events, there’s also a North v South trophy up for grabs at Highlands.”

“We’ve spent the last five years hosting the Australian GT Championship in November and in that time we’ve seen a real explosion in endurance racing in New Zealand,” says Highlands Chief Operating Officer, Josie Spillane. “We’re excited about hosting the best Kiwi drivers, teams and cars and the team at Highlands look forward to showcasing our facilities, the world-class track and our renowned Central Otago hospitality.”

Among the favourites to take out the NZEC will be Neil Foster who won the SIES 3-hour championship and Simon Evans, the winner of the ENEOS North Island Endurance Championship. Highlands owner Tony Quinn is also a likely starter despite a controversial disqualification at Teretonga in September.

Quinn and his co-driver Damon Leitch (a professional driver at Highlands) won the race but as Damon was returning to the pits after the race he helped his brother Brendon restart his car after it had stalled just short of the finish line. Leitch and Quinn were disqualified but Chris Dunn is confident that Quinn will be on the starting grid. “We’ve had some of the cars who finished in the top 20 pull out of the event at Highlands so I’m sure we’ll see Tony and his Aston Martin in action at Highlands.”

This year’s finale will be the first time the Cromwell circuit has hosted the finale. Previously, the NZEC decider has been held at Pukekohe Park, Manfeild Circuit Chris Amon and Mike Pero Motorsport Park in Christchurch.

“The SIERDC raced at the very first meeting at Highlands in 2013 when Shane van Gisbergen won a dramatic victory,” says Dunn. “He came from two laps down or something ridiculous and I remember he had the car on two wheels through the corners and drove the pants off it to win the race. We haven’t been back to Highlands since so we’re excited about this event.”

“t’s a beautiful venue in a beautiful part of the world and the drivers and teams are really looking forward to racing on the track.  We have four classes in the 1-hour and five classes in the 3-hour so you don’t have to have the fastest or most expensive car in the field to come home with some silverware.”

The South Island series has been running since the early 1980s but the first New Zealand Endurance Championship was held in 2015. It alternates between a North Island and a South Island venue every year and the standardised rules between the two series has proven to be a real boost for the category.

“It’s really helped endurance racing in New Zealand,” says Dunn. “It’s an incredibly popular event with drivers. We had a waiting list for the 1-hour event at all our rounds this year and we’ve had near capacity grids. We’ve got GT3 cars racing with us, V8 Supercars and V8 Supertourers. Then we’ve got hot rods that have been built by guys in their sheds at home that can beat some of the factory cars. It’s just a really open formula which allows for some freedom of expression in the cars and makes for some incredible racing. It’s a really strong formula at the moment which is very positive for the sport in this country.”