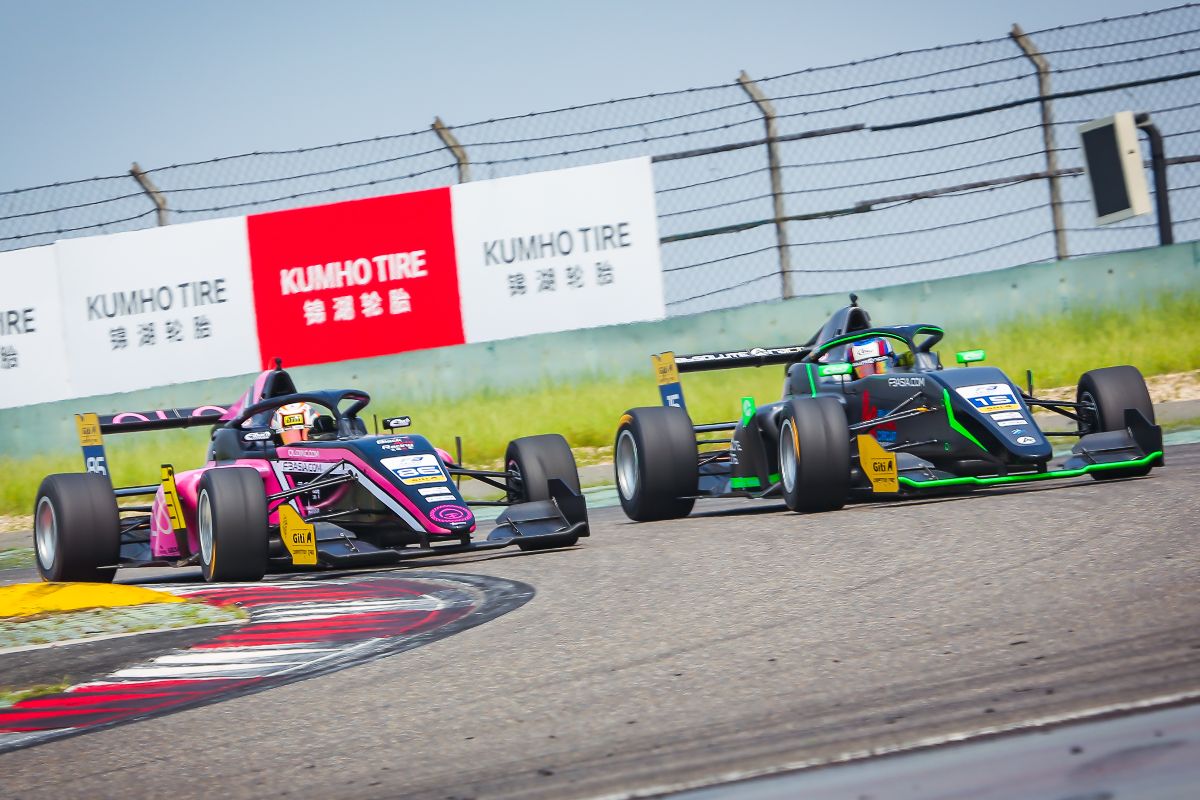 No China Crisis but Leitch had hopes for a win

Invercargill racer Brendon Leitch enjoyed the highs and lows of motorsport last weekend in China, but proved again he’s one of the most versatile Kiwi racers in international motorsport right now.

Both the fifth round of the Lamborghini Super Trofeo Asia series and the fourth round of the Asian Formula 3 Championship took place over the weekend at the 5.45 km Shanghai circuit, which is also the venue for the country’s Grand Prix. Testing for both took place on the Friday, with a race in each category for Leitch on Saturday then two F3 races and a Lamborghini race on the Sunday.

“I was pretty stoked with the F3 car in qualifying,” he explained. “The car was going to be good in the race because that’s the balance I was working on all practice so we were pretty confident. Although we were only fifth in the Lamborghini, it was pretty solid given my limited time in the dry and the quality of the drivers ahead of us and behind us.”

Third in the first F3 race included a pass on series leader Jack Doohan got the Invercargill ace’s weekend racing programme off to a good start, but he found himself stuck in fifth in the Lamborghini race and that ended up sixth after handing over to his co-driver in the Pro-Am class, Italian Massimo Vignali.

“It was good to get a podium in F3 but I remembered I couldn’t actually drink any champagne because I had another race! So it was a quick turnaround from the BlackArts overalls to the Leipert Motorsport overalls and into the Huracán. I didn’t make too bad a start but went side-by-side with Chris Van der Drift into the first corner. I gave it a good crack but ultimately ended up on the wrong side for the second corner and dropped back into fifth. I managed to hang onto the back on Norman Nato for a few laps but couldn’t make anything of it. I then just did the best I could to hang on without taking too much life out of the tyres so Massimo had a good car to work with. He jumped in and hung on tremendously well and we brought it home in sixth overall.”

A second row start in the second Asian Formula 3 race promised much, but an average getaway and running the race on old tyres hampered Leitch’s efforts and he had to be content with a fifth place finish and the second fastest lap.

In the second and final Lamborghini race of the weekend Vignali took the start and impressed Leitch with great pace in the early stages, so much so that Brendon thought he would have used the best of the car’s tyre performance by the time he took the wheel. That wasn’t the case, however, and the Lamborghini Junior was able to put in one of his best drives to date in the 2019 Super Trofeo Asia series.

“Massimo started in fourteenth and I swear he must have had a few to many coffees because he was absolutely flying. He passed three cars quickly and was running very competitive lap times. On one hand I was thinking the car must be awesome and on the other was concerned there would be no tyre life left by the time I got in. I jumped in and was very surprised he had looked after it really well. Straight away I was third fastest car on track and could focus on making progress through the field.

“I was really happy with the handling and managed to set plenty of personal best sectors. I could push as hard as I wanted and was delighted to come home fifth overall and second in Pro-Am. It was one of the most enjoyable stints I have had in the car all season.”

Almost immediately after the race Leitch was back aboard the F3 car for his final race of the weekend confident he could win. “With new tyres and handling that was getting better and better every time I went out I had honestly convinced myself this was my best chance so far of the year to win a race,” he added.

“Although I started fifth, I got a great start and went to the outside where I took third. Unfortunately contact with another car put me off. I was surprised it was still intact and managed to get going again. The pace was as I had hoped for and I managed to get back up to sixth with fastest lap of the race, but was penalised ten seconds for the first corner incident and dropped to eighth in the final result.

Leitch sits fourth in the Asian F3 points table and second in Pro-Am in the Super Trofeo Championship and races again in the final weekend of Asian F3 in Shanghai again over the 28 – 29 September.

Caption: Leitch during his stunning recovery drive in the final Asian F3 race of the weekend in Shanghai. Picture supplied.