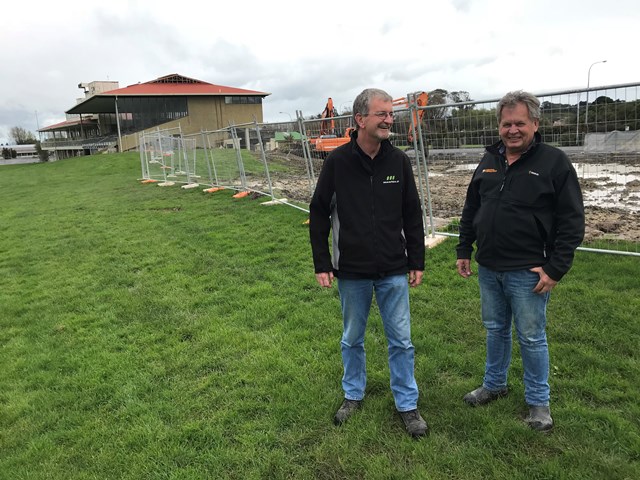 The ease of demolition of three Manfeild Park buildings is a powerful reminder why their time had come.

Grandstands bordering Brendon Hartley Drive, the main access into the venue from Feilding’s South St, have now been toppled.

The buildings’ fate was sealed through abject inability to meet code compliance for earthquake risk.

The poor state of the structures, also influenced by an asbestos and fire danger risk, was highlighted during demolition, Manfeild Park operations manager Steve Easthope says.

“It has been a great relief for us that the buildings are finally down.”

The grandstands dated to the Feilding Jockey Club’s tenure, a period that ran from 1890 and ended in 1999, when the club moved to Awapuni and sold the land and chattels to Manawatu District Council, which subsequently handed it over to Manfeild Park Trust.

The buildings were subsequently used for a variety of community and commercial purposes.

The public role progressively curtailed after a national earthquake risk assessment of old buildings, in the wake of the devastating 2010 Canterbury shake, raised significant safety concerns.

The complete removal of the most modern of the three structures was facilitated in just a week – while the two others were each demolished in mere days, reflecting their diminished robustness.

The designs also made for a speedy job by the Feilding-based contractor.

With these, the key element was removing the signature overhanging roof. This has to be taken apart in a controlled manner, with co-ordinated deconstruction starting at the outside edges.

The asbestos found in all three structures required particular care.

“The biggest determining factor with any demolition now is how you remove that material safely. There are a lot of controls and regulation around that.”

The teardown also focussed on materials’ salvage; a factor that played especially positively for the oldest structure, of brick and timber construction, though the other predominantly concrete were also highly recyclable.

“Brick and concrete are easy to demolish – concrete is friendly because it can be recycled as a clean fill product. The brick in this instance is not easily re-used because of the type of mortar but the potential for the timber is high.”

Mr Easthope said New Zealanders’ awareness of earthquake risk was undoubtedly raised as result of the devastation of the 2010 Canterbury quake.

“While we all naturally have sentiment for heritage, it is far more important to ensure public safety. In this instance, the buildings were of a state where there was no other alternative than to remove them.

“We are delighted the demolition went smoothly and speedily.”