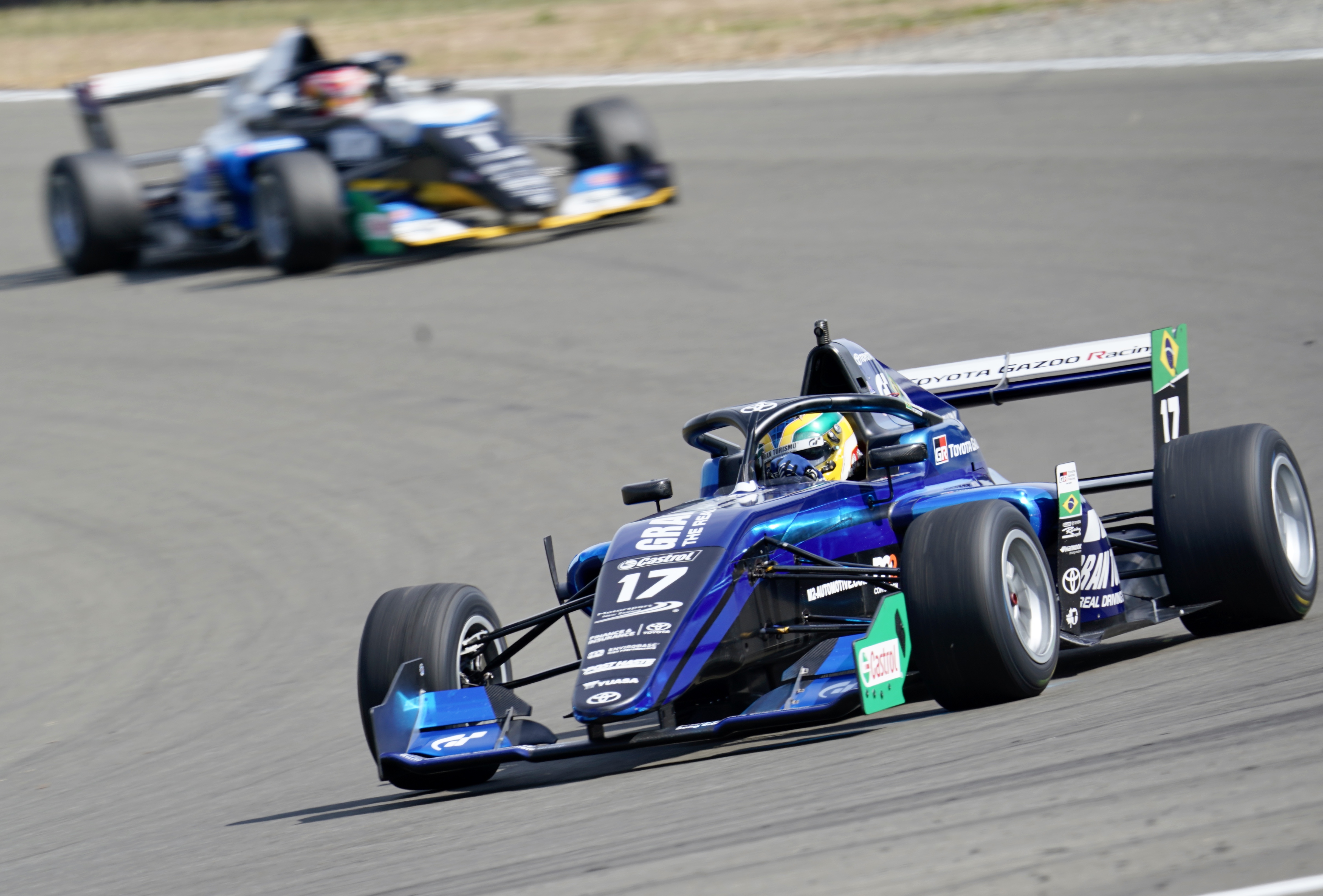 Brazilian Igor Fraga fired the first shot in the battle with Liam Lawson for the 2020 Castrol Toyota Racing Series title by dominating the first race of the weekend at the New Zealand Grand Prix meeting at Manfeild.

Fraga’s win – by 1.7 seconds from reigning champion Lawson – narrowed the points gap between the two M2 Competition team mates to just four points with only Sunday morning’s race and the New Zealand Grand Prix on Sunday afternoon remaining in this year’s closely fought championship. Lawson sits on 317 points, Fraga on 313.

Fraga survived a Safety Car period and restart following a heavy shunt between Emilien Denner and Henning Enqvist to keep Lawson at bay throughout the race. Pole position holder Franco Colapinto was a fighting third and secured the 2020 Castrol Toyota Racing Series Rookie title in the process.

“We had a great pace in the race and the car felt very comfortable,” said the delighted 20 year old Gran Turismo champ after the race. “I was aware of Liam behind me, but this time it all went how I wished and I stayed in front. It’s important for the championship and we will keep pushing right to the end.”

Whilst Lawson would have preferred to give chase to his championship rival Fraga, it was a defensive stance he had to adopt in the race as he came under increasing pressure from Kiwi Motorsport’s Franco Colapinto, who didn’t make the best of starts from his pole position. Franco stayed in Liam’s mirrors throughout, however, and on a couple of occasions even had to decent look to his left and right weighing up a pass.

Caio Collet was a lonely fourth for mtec Motorsport engineered by R-Ace GP and Spike Kohlbecker converted his third place start to a decent fifth place finish at the end, a solid result for Kiwi Motorsport and the young Kohlbecker’s best of the Castrol TRS season.

That entire group had made a good getaway from the rest of the field early on until the third lap when Denner seemed to miss Enqvist looming large in his mirrors on the outside of the final turn at the back of the mid-field battle pack. The two made contact and Denner was pitched into a spin which ended with the rear of his car hitting the tyre barriers. Enqvist was pitched hard left and rattled along the barriers before coming to a halt. Both drivers emerged unscathed but the incident caused a decent delay whilst the two cars were retrieved from the gravel.

At the restart, with 13 laps to go, Fraga was cleanly away and the front group again steadily pulled away from the group behind, which was led initially by Yuki Tsunoda in the Red Bull liveried M2 Competition entry. The battle for sixth and beyond was arguably the best of the entire race as Tsunoda, Tijmen van der Helm, Lucas Petersson, Lirim Zendeli, Oliver Rasmussen, Jackson Walls and Ido Cohen fought it out nose to tail for much of the race.

At the flag, Fraga was a comfortable winner from Lawson with Colapinto a fighting third. Igor also bagged fastest lap of the race on his final tour as well, as if to confirm there was plenty left in the tank for the Sunday climax to the series. Collet finished in fourth ahead of Kohlbecker while van der Helm won the mid-field battle to bring his car home in sixth. Petr Ptacek had another competitive race to finish seventh, while Petersson finished eighth ahead of Tsunoda in ninth. Australian Jackson Walls took yet another top ten finish position for mtec Motorsport.

At the back, 78 year old Kenny Smith had the crowd on their feet early on when Grégoire Saucy went off through the mid-field sequence of Manfeild’s challenging banked turns on the first lap and elevated him a place. He then pulled off a tenacious pass on Rui Andrade to move up another place. He held his own for several laps but fell back after the restart to come home in an eventual 17th position.

The Sunday morning race – the penultimate of the championship – will have grid featuring a reverse of the top eight from today’s race result, which puts Lucas Petersson on pole position alongside Petr Ptacek.