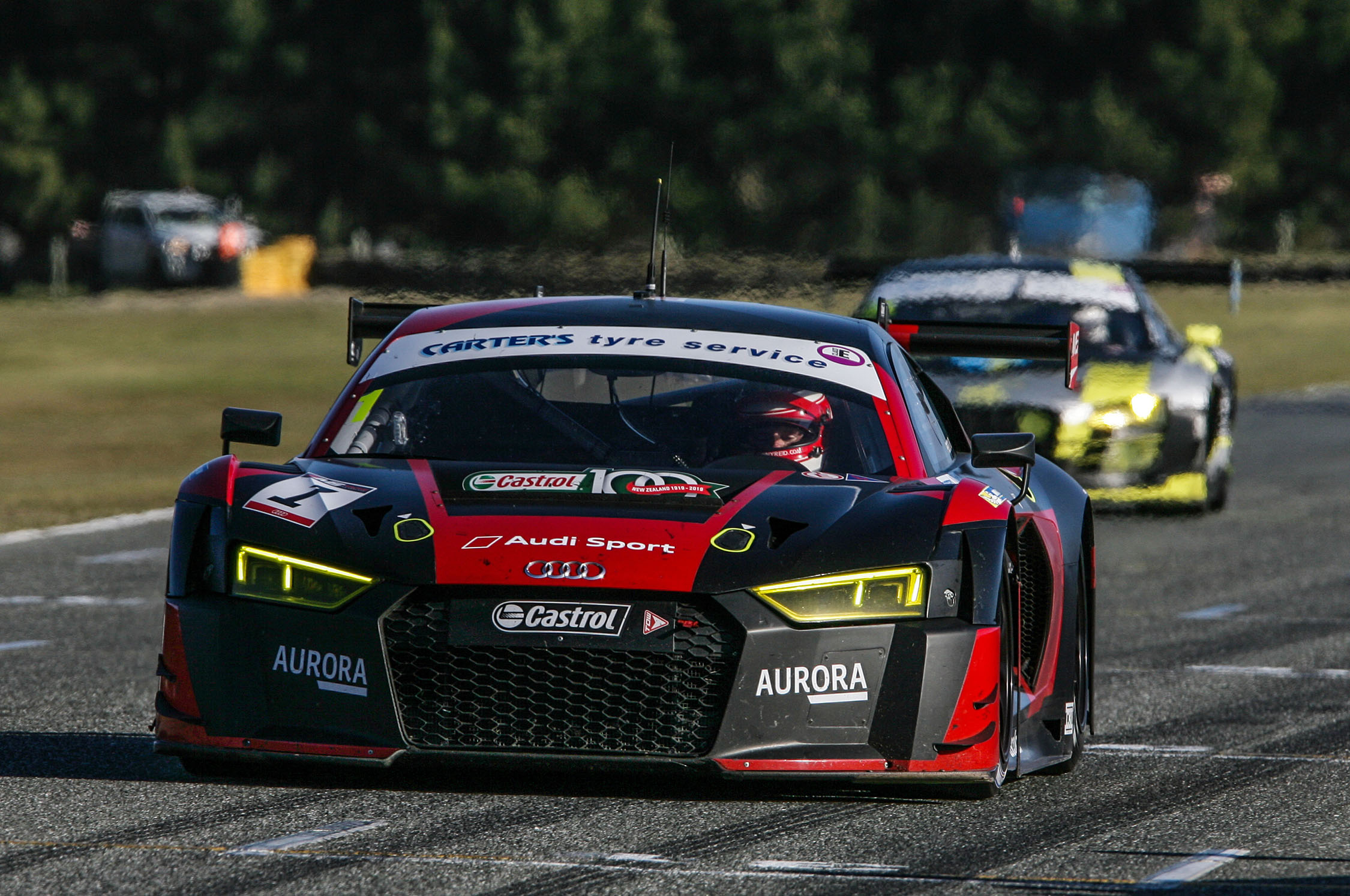 Current NZ Endurance Champions Neil Foster and Jonny Reid have continued on their winning way taking victory in the opening Three Hour race of the 2019 Carter’s Tyres South Island Endurance Series. The opening round held at Teretonga Park in Southland proved to be a thriller with the lead changing a number of times. Second home was the Audi R8 GT3 Evo driven by Dale Chapman/Marc Doran/Andrew Waite with the Anthony Leighs/Paul Kelly Porsche 911 Cup car in third.

Foster, also the current South Island Three Hour champion, and Reid (Audi R8 LMS), set the fastest time in qualifying ahead of the very quick Aston Martin Vantage GT3 of Tony Quinn and Damon Leitch. However, it was the Aston Martin that took the race lead right from the start. Within the first hour top contenders George McFarlane/Jack Milligan (Porsche 997 GT3R) retired with a broken wheel bearing while the Chev Camaro GT3 of John McIntyre/Simon Gilbertson dropped down the field from second position, having pitted with a broken radiator hose clamp.

The second hour had no less drama amongst the remaining top contenders. While the Chapman/Doran/Waite Audi took the lead from the Quinn/Leitch Aston, first the awesome sounding BMW Z4 GT3 of Marco Schelp/Matt Hamilton appeared to drop a cylinder on the main straight which dumped oil on the rear tyres. A resulting fire in the engine bay curtailed their afternoon bringing out the safety car. Eventually the race was red flagged when the brand-new Porsche 991 GT3 of Scott O’Donnell/Allan Dippie appeared to clip a slower car resulting in the Porsche spinning and hitting the bank at turn 2, causing some serious damage.

The race was stopped for some time and once it got underway again it was the Foster/Reid Audi that took the lead heading into the final hour. The Chapman/Doran/Waite Audi held second ahead of the Leighs/Kelly Porsche with Ben Byers/Christina Orr-West (Audi R8 LMS Ultra) fourth. These four would hold station through to the checked flag. With less than 40 minutes remaining, the Aston Martin retired with a broken gear box, allowing the McIntyre/Gilbertson Camaro to take a hard-earned fifth, having clawed their way back from a lengthy pitstop.

In a fortnight’s time teams and drivers will head to the second round at the Highlands Motorsport Park in Cromwell, 5 October 2019.

Prepared by Sunday Business Networks Ltd on behalf of SIERDC.