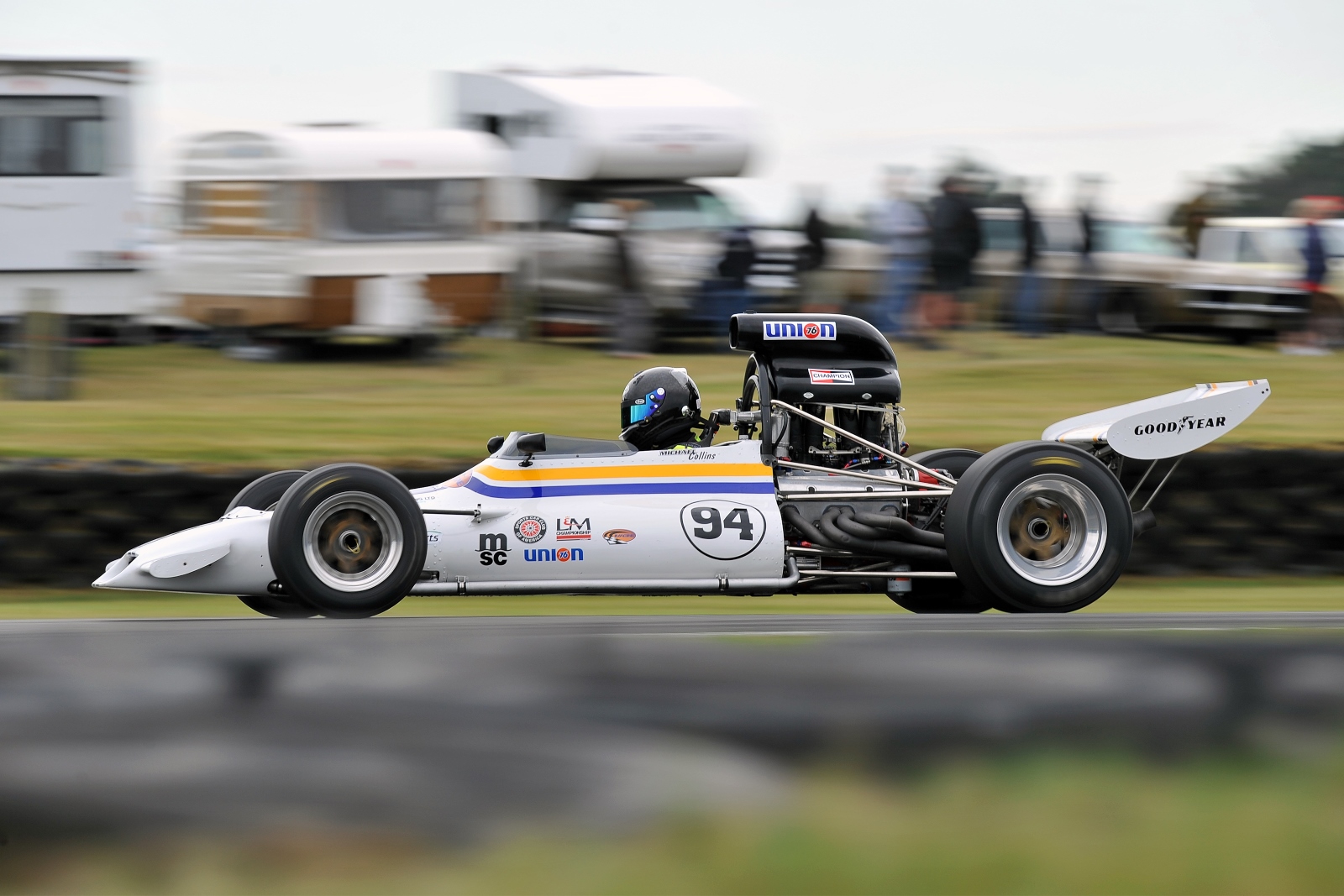 And that is exactly what the 24-year-old now is, the 2019/20 title finally awarded to him last week after series organiser. the New Zealand Formula 5000 Association, decided to call the result of the COVID-19-interrupted series after the fourth round and officially cancel the originally postponed series’ final which was to have been run at the HRC’s annual Legends of Speed meeting at Hampton Downs in March.

“At the time we were quite bullish about getting in our final round, “ says committee member Glenn Richards. “But as the days turned into months I think we all started to realise that a better idea would be to put a line under the 2019/20 season and start planning for 2020/21.”

The long-running NZ-based but internationally-revered and recognised SAS Autoparts MSC NZ F5000 series could hardly have a better champion either.

A former karter and 2016/17 South Island (of NZ) Formula Ford champion, Michael Collins has been impressing everyone involved in the series with the maturity and racecraft he first displayed behind the wheel of the Alastair Hey-owned/Collins family-run Leda LT27 at the opening round of the 2017/18 series at Pukekohe Park Raceway.

Then just 21-years-of-age, the mild-mannered, quietly spoken young man won his first-class race at the second round of that season’s SAS Autoparts MSC series at Feilding’s Circuit Chris Amon Manfield a month later before adding his first clean sweep of all three class races at his home round (the annual Skope Classic meeting at Christchurch’s Mike Pero Motorsport Park) in February 2018.

He enjoyed similar success over the 2018/19 SAS Autoparts MSC NZ F5000 series’ season but like the year before, prior commitments meant he had to miss the final – and key points scoring – round.

Ironically the COVID-19 Lockdown saw everyone in the category miss the final round of the current – 2019/20 – SAS Autoparts MSC series at the Hampton Downs circuit in the northern Waikato in March – meaning the title went to the driver with the most points – Collins – after the penultimate round at the George Begg Classic Speedfest meeting at Invercargill’s Teretonga Park circuit back in February.

Despite missing out on another perfect pole & three-race-wins-from-three-starts record thanks to a half (drive) shaft which let go on the final lap of the SAS Autoparts MSC feature race at the big, new George Begg Classic Speedfest meeting, the then 23-now-24-year-old had actually held the 2019/20 series lead since the first round at the annual MG Classic meeting at Feilding’s Circuit Chris Amon Manfeild in November last year.

There he qualified on pole and – in the surprise absence of defending series titleholder Ken Smith who, as it turned out had sold his Lola T332 and would take no further part in the 2019/20 title chase – won all three races

The young tradie – who works as an electrician when he is not racing the ex-Evan Noyes and Chris Lambden Leda LT27 004 – did have to play second fiddle to visiting UK historic racing hotshot Michael Lyons at the second round at the annual Taupo Historic GP meeting at Bruce McLaren Motorsport Park in January.

However, he returned the favour on the Lola T400-mounted Lyons at his annual ‘home’ round, the three-day Skope Classic in Christchurch in February, where he qualified on pole and won two of the three races.

A fortnight later he was just a lap away from a second-round clean sweep for the season at Teretonga Park, when the half-shaft broke as he was beginning his final lap.

Despite that disappointment, Collins says he can look back on his third season with some satisfaction, particularly when it comes to getting the most out of a car which – for all intents and purposes – is almost 50 years old.

“It’s something that’s always in the back of my mind when I am driving the car,” says Collins. “And I take my hat off to the guys like Graham McRae who raced them back in the day because without any of the electronics and driver aids you get in modern cars like the ones they race in the TRS you are flying a bit blind in terms of setting them up. But in saying that you develop a feel for what they like in terms of suspension set-up and things like ride height, it just takes a bit more time to get your head around how they like to be driven.”

Car co-owner Alistair Hey couldn’t be happier with the result either, he and son James helping where possible along the way but keen to see Michael and his family take the Lion’s share of the credit for ‘a job well done.’

“While myself and my partner Vicki own the car, it is fully maintained and run by the Collins family consisting of Brian, Mark, Andrea and Michael. Together they bring a wealth of knowledge and experience with them from their time in karts and Formula Ford, and they put in huge hours both before and during the season to prepare and present what was always an immaculate race and now championship-winning car.

“As the owner of that car I could not be prouder of what Michael and the family continue to achieve and as a true Kiwi I am humbled to have witnessed the effort they have put in and what – with that effort and dedication – they have achieved,”

Second overall after his most competitive showing yet was Lola T400 driver Glenn Richards ahead – albeit by just 6-points – of fellow Aucklander Grant Martin (Talon MR1/A) who in turn had just a 5-point margin in the end over the big improver of the 2019/20 season, former New Zealand Formula Ford champion Kevin Ingram from Feilding driving a the first of the category’s Lola T332s.

In sixth place, after what can only be described as a ‘titanic, season-long battle for supremacy in Class A’ (for older series cars) with fellow McLaren driver Tony Roberts (McLaren M10A), was another Auckland-based category stalwart, Frank Karl driving his ex-Alan McKechnie/Guy Edwards McLaren M10B.

The two McLarens were rarely separated by more than a second or two on the track though in the end, it was Karl’s superior consistency (he was the only driver to start and finish all 12 races) which saw him pip Napier man Roberts for the Class A title.

Unfortunately, plans by the local F5000 Association to travel to Ireland and Great Britain for major Historic motor racing meetings at Mondello Park on Aug 15 and 16 and at Oulton Park from Saturday, August 29 to Monday, August 31 have also had to be cancelled.

However work on firming up the 2020/21 SAS Autoparts MSC NZ F5000 Tasman Cup Revival series is well advanced with committee member Glenn Richards saying that he expects to be able to announce firm dates and venues within a month,

“Obviously, like every other sporting code operating in the shadow still being cast by the Coronavirus, our ability to plan ahead could still be put in jeopardy by a second outbreak via community transmission, but fingers crossed that won’t happen and we will be able to run another, domestic-based series like we did in 2019/20.”

‘I know, I’m keen to get back in my car, as is everyone else is into theirs since the Lockdown restrictions were lifted. We’ve even had some enquiry re cars for sale from people keen to join us, so that is obviously another positive sign.”