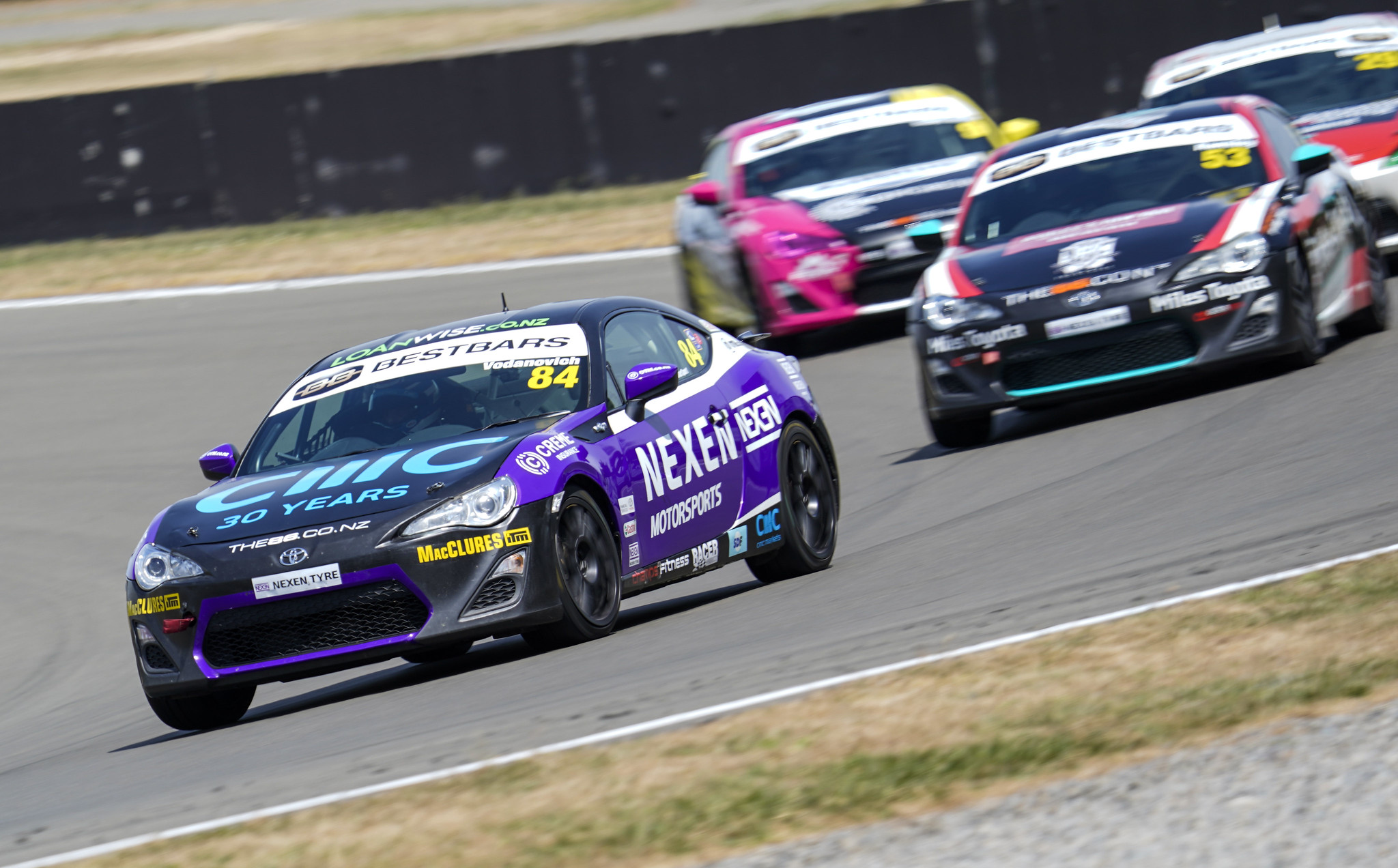 A dominant display by young Peter Vodanovich saw him take victory in the first race of the weekend at the fourth round of the Best Bars Toyota 86 Championship at the New Zealand Grand Prix meeting at Manfeild.

Starting from the front row of the grid, Vodanovich and his NEXEN DTM car made the perfect getaway to take the race lead from pole position sitter Connor Adam, who got bogged down with far too much wheel spin off the start line in his Poste Haste backed car. Championship leader Jaylyn Robotham in his Eastern Performance Centre car also found a way around Adam as did Jaden Ransley’s Miles Toyota 86.

As the battle for second and then third raged over the early laps and then late into the race, Vodanovich got his head down and was able to build an unassailable lead.

“The team has given me a totally on point car today,” he said after the race. “We’re working really well together and it’s showing on track. I am really happy with the car pace we have and of course, we’re all stoked to get the win. I think we were playing a bit of cat and mouse in qualifying with the championship contenders. We didn’t maximise our qualifying pace but we managed to show it in the race.”

With Vodanovich out on his own in the race, attention was focussed on the fierce battle behind him that first involved championship leader Robotham, Ransley and Adam. As the race wore on, the Australian ace was able to pull away from the battle and establish himself in a clean and secure second place, though he was unable to make any real impression on the leader.

The battle for third between Adam and Ransley, however, just increased in intensity as the race wore on and with five laps to go the pair sat side by side for almost two laps, each driver unwilling to give even an inch to the other. The squabble compromised their outright speed and as they dropped back from Robotham, the fight allowed Justin Allen in the Battery Town car to catch them. He was going so well in pursuit that for a little while, it even looked like he might be able to find a way by for a home podium. Adam and Ransley, however, battled on and in the final three laps were able to pull away from Justin and make it a two-way scrap for the final podium place.

At the flag it was Vodanovich with a comfortable margin of four seconds over Robotham. Jaylyn had an equally comfy buffer to the two behind but their battle was far from over, even in the final few corners. As they exited the last corner for the final time, a fired up Adam jinked left and was able to out drag Jaden for third at the line to a roar of approval from the crowd. Allen grabbed an excellent fifth after a very solid drive on his home track while a little further back Australian Toyota 86 series race winner James Wilkins came through the mid-field well in his best drive in the championship to take a well-deserved sixth place.

Brock Gilchrist came through the mid-field battle for seventh for NEXUS Logistics, while Total Oil-backed racer Campbell Stewart brought his car home in eighth. Richard Peasey made it three Australians in the top ten with ninth wile Andrew Jackson had a good run through to complete the top ten in his Northshore Toyota car.