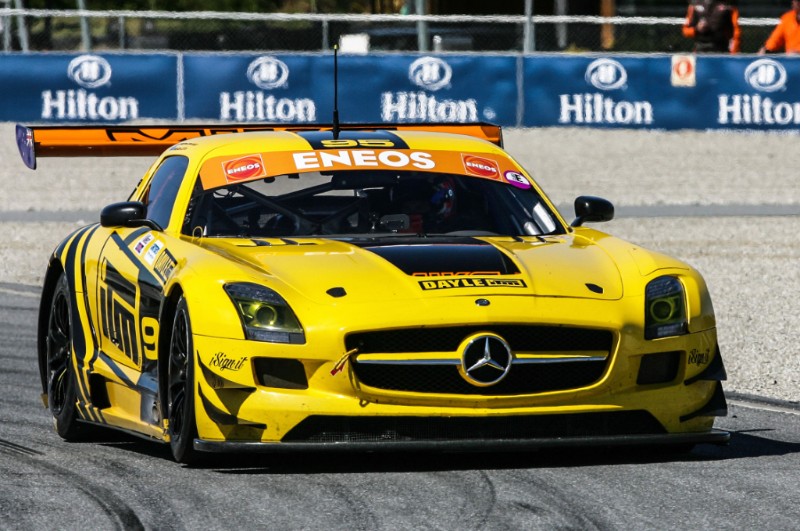 As is often the case in a three-hour endurance race, the war of attrition takes it toll and the Dayle ITM Mike Racing Mercedes SLS AMG GT3 fell victim to a mechanical failure, in the final half hour of the New Zealand Endurance Championship.

The driveshaft gave up while driver Brendon Leitch was in third position at the Highlands Motorsport Park-hosted event in Cromwell, on Saturday. It was a heartbreaking end to what was shaping up to be a podium finish for the Dayle ITM Mike Racing team.

Running to the FIA GT3 standards due to the team’s close affiliation with AMG, the Mercedes had an air intake restrictor in place, which tones its horsepower down compared to some of its rivals, which utilise unrestricted specifications. To be up as high as it was, in what was arguably the best field of endurance racers  in New Zealand, was a credit to drivers Leitch and Christina Orr-West.

They had perfectly pooled their skills in managing the Mercedes over the previous two and a half hours to set themselves up for the best shot at a top three finish before the breakdown robbed them of the chance.

Dubbed ‘New Zealand’s fastest mum’ by the media, Orr-West was the only woman racing in the endurance event and was making her debut on the Cromwell track. She was aiming to get her head around the 4.1 kilometre circuit in the practice sessions on Friday.

However, the test laps didn’t run entirely to plan for the Dayle ITM Mike Racing team, as the Mercedes had a few issues. One of the fuel injectors seized up, so the mechanics took it apart to fix it and also replaced the driveshaft.

Orr-West was the first in the driver’s seat on Saturday and had a niggly down shift problem in her first six laps.

“It was a bit heavy coming up behind people and I nearly ran into the back of a few cars,” she says.

A packed 31-driver grid meant the lower capacity cars were quickly lapped as the faster cars threaded their way through them, flashing their lights as they came up behind to signal their intention to pass.

“The biggest thing out there was the traffic. There were a few hair-raising moments getting past some of the slower cars. I’ve never raced here before and it was definitely a learning experience about where you do and do not pass. I love the track and it is a real commitment-requiring circuit,” Orr-West says.

She handed the Mercedes over to Leitch at the driver change and after a slick pit-stop, it was back out and battling at the front of the field.

“Then the driveshaft just let go without about 20 minutes to go. We were running third at the time, so it was a shame we couldn’t push on for the podium at the end,” Leitch says.

After an almighty battle throughout the three hour race, Jonny Reid won in the Audi R8 GT3 LMS he shared with Neil Foster and Andrew Waite was second in the Aston Martin Vantage GT3 that belongs to his co-driver and the track’s owner Tony Quinn.