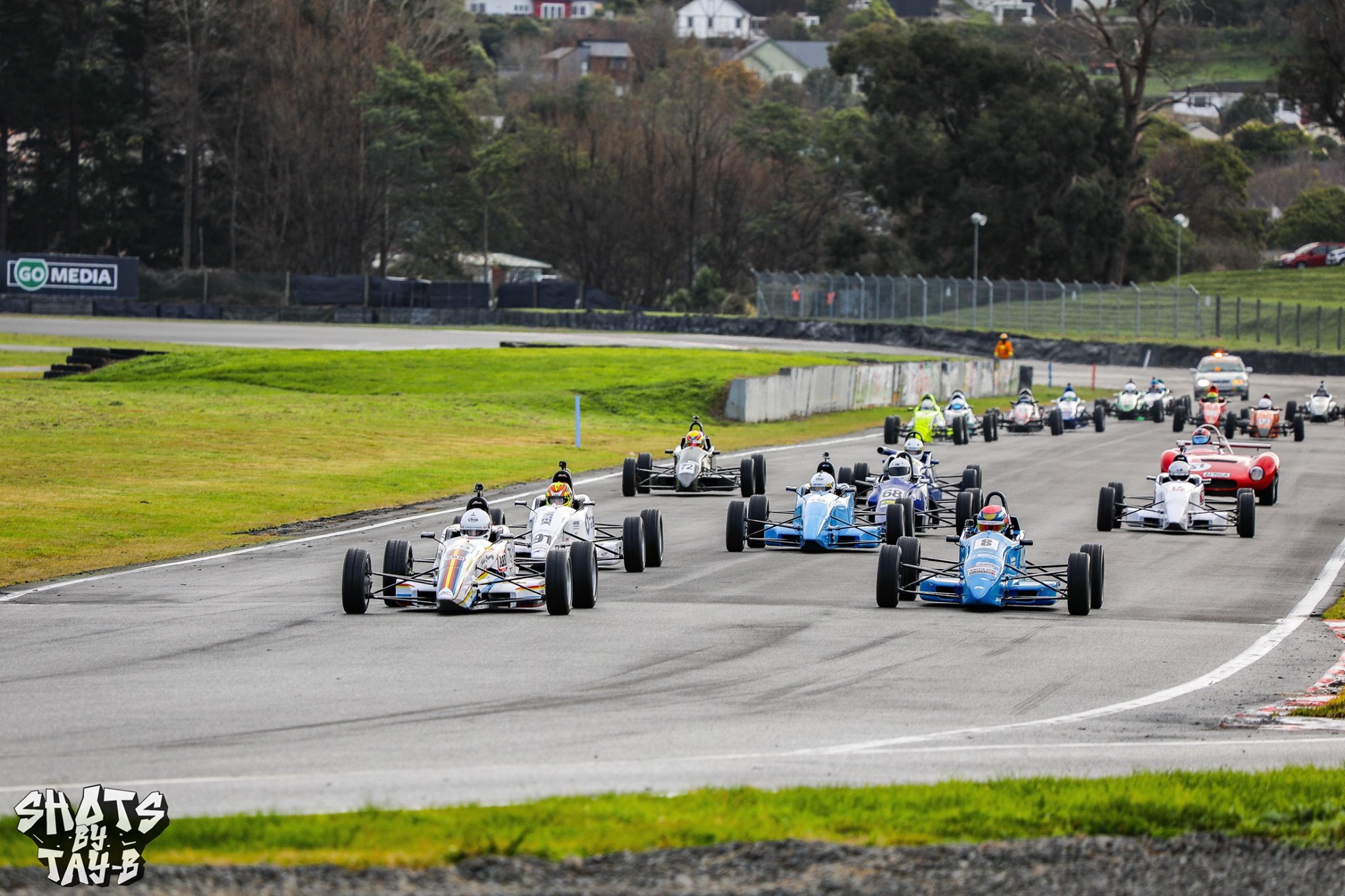 The fourth and final round of the Formula Ford Winter Series concluded in dramatic circumstances on September 1st. Practice on Saturday saw then series leader Callum Crawley encounter terminal engine failure in his Spectrum 015, putting the car out of contention and the team scrambling to try to find a solution. Left in the box seat, Billy Frazer then encountered issues of his own, a faulty oil pressure sensor left the the Career Racing team hunting for a fix, unable to find anything out of place in the mechanical oil system, a check of the car Sunday morning highlighted the sensor issue, allowing Frazer to race on as planned.

Qualifying started in ideal conditions, a cool sunny morning giving a dry track to the drivers. Frazer started to reduce his 57 points deficit to the absent Crawley from the get go, claiming pole position and the bonus point, Ronan Murphy had a strong session to qualify second, followed by an improving Thomas Boniface and Henry Thomas-Kircher. Cameron Tanner was 5th, Jordan Mounfort 6th and Keith Miller 7th, rounding out the already reduced field of cars

Unfortunately the number would drop to six for the first race, as Henry Thomas-Kircher was unable to resolve a large oil leak in the car, calling it quits for the remainder of the day.

Race one started perfectly for Ronan Murphy, an ideal getaway form the line saw him lead comfortably into turn 1, while Boniface leapt to 2nd, going side by side with Tanner into the first corner. A slow starting Frazer dropped to fourth, almost losing a place to Jordan Mountfort in the process, but recovered to go wheel to wheel with Tanner through the Splash turn, striking luck as Tanner ran wide at the hairpin, edging onto the grass and eventually kissing the tyre barrier. Tanner would get the car re-fired and on its way, thankfully unscathed. Up front though, Frazer was able to slip his way past Boniface on Lap 2 at turn 5, and after chasing down a Fleeing Murphy, Frazer took the lead at the last corner on lap 3, immediately setting to work to open a gap to consolidate the important win.

A poor race then got worse for Tanner, out braking himself into turn 1, he ran wide and got caught in the gravel trap. A Safety car was called to retrieve the Stricken Van Diemen, while the restart caught Frazer out, crossing the line only 6 hundredths of a second in front of Murphy! Boniface continued his strong race in 3rd, Mountfort finished 4th and Keith Miller 5th.

Race 2 was a similar affair at the start, Frazer had another slow getaway, leaving Murphy, Boniface and Tanner to lead into turn 1. Frazer moved up to third past Tanner at Splash, returning serve to Tanners move in the first race. Lap 2 and Frazer was on a mission, slicing past Boniface on the front straight. Murphy was next to fall victim, Frazer being able to draft past him into the final corner on the same lap to jump into the lead once again.He was unchallenged for the remainder of the race, taking another step to the required perfect weekend to claim the title. Another strong race by both Murphy and Boniface saw them finish a clean 2nd and third to complete the rostrum, while Tanner had a much improved race 2 to come home 4th, followed by Jordan mountfort and a quickly improving Keith Miller.

The Final race and the weather conditions had improved even more, a cloud cover cooling the track, allowing everyone to set their fastest times of the day throughout the 7 lap sprint.

Ronan Murphy made it a perfect 3 from 3 to lead into turn one, while Tanner made another impressive start to jump Boniface and almost Frazer, heading side by side into the first corner. eventually losing the position around the outside to Frazer, Boniface made the smart decision to follow Frazer through into third past Tanner.

However, it was not long before the unstoppable Frazer was catching Murphy, with a great deal more straight line speed into Higgins, Frazer was able to launch down the inside and hold onto the lead at the conclusion of the second lap. Murphy had tuned the car up to the grippier conditions, and held close to Billy Frazer, keeping the white spectrum consistently in the mirrors of the leader, ready to pounce at any small mistake. It was a luckless attack though, Frazer keeping a cool head to finish a perfect weekend in style, Pole positions and 3 race wins being enough to clinch the title by a mere 4 points of local man Callum Crawley. Boniface would finish the race 3rd for another strong podium of the weekend.

Tanner crossed the line in 4th place, and with the absence of Zac Stichbury and Brody McConke, held onto 4th in the championship, a strong showing for his first full season with massive gains found over the four rounds.

Jordan Mounfort finished fifth once again, enough for him to claim second in class, with large improvements made to the car between the rounds he competed after the team had been chasing engine power.

Newcomer to the class for this season, Keith Miller finished 6th in the final race. Having jumped across into Formula Ford for round 1 of the winter series from a saloon car, it had been a large learning curve for the wellington based driver to adjust to the momentum style of driving required for a Formula Ford, however a 4 second lap time improvement over the season shows there is plenty more to come in the future.

Ronan Murphy would finish 3rd in the points, a very consistent run for the Elite Motorsport academy graduate, only being robbed of second place overall by an engine failure in round 3.

Overall, it was a very successful series for the Spectrum 015 chassis as well, claiming 11 of the 12 wins across all 4 drivers (Frazer, Crawley, Murphy and Ngatoa), the final win going to the Mygale of Zac Stichbury

Preparations now turn to Round 1 of the New Zealand Formula Ford Championship in 2 weeks time as a support card for the ITM Supersprint. With a strong field of 17 cars expected, the high speed drafting nature of the south Auckland track is sure to turn on some world-class racing for everyone to enjoy